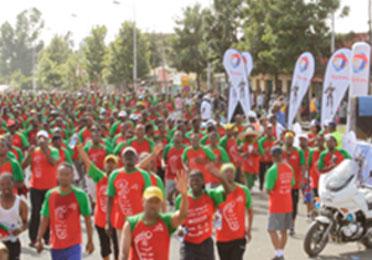 The 2014 10 kilometers GER has taken place on Sunday November 23, 2014 that started  from   around Menelik Hospital  & ended  at a place called“ Janmeda “.
In this Ethiopian colorful running event, Total was a senior sponsor & located on the 7th kilometers in the running circuit called Abuare roundabout.
The two beautiful tents , flying banners,  inflatables with running iron man & Live DJ music has made the Total’s  spot the attraction of participating runners & the surrounding was further liven up by the participants chanting & dancing till end of the program.
5000 Lubricant & Abyssinia card and   1000 copies of  “ I am a safe PEDESTRIAN” brochures are distributed on the event.
Generally participants applauded Total’s presence in the circuit & admired its preparation.
For reference we gave you  selected pictures of the event and please send us the final version to avoid the issue of the disclaimer.