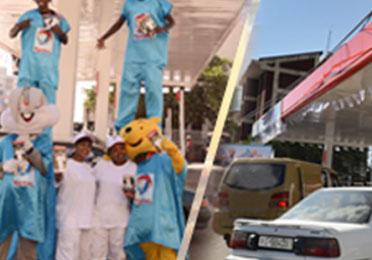 TotalEnergies Ethiopia has launched the second round Lube promotion campaign:-
The 2nd round Lube promotion campaign for 2014 is started on November 3, 2014 at all A/A & selected up country stations with defined offer principle of lubes volume and giveaways like Caps, T/shirts & Shorts 21,000 leaflets are distributed to customers at the NW stations and 500 posters distributed for NW stations (promotion poster is attached to have detail of the offer principle and type of giveaways).
The campaign has 80 Radio spots on Radio Sheger, Ethiopian National Radio 97.1, on Radio Fana, all on prime news times and widely heard programs and it was on air on the National Ethiopian Radio during Addis automotive radio program which is sponsored by TESC.
This campaign is accompanied by station animation events at A/A stations with promotion hostesses, vehicle with full set up of audio ad with amplifier and other entertaining supports to catch attention of the wide public & customers.
The CD of Radio ad is distributed to AA stations to transmit at the stations.